Time to experiment with the wild hops! I used the same pale ale recipe that I have used for others. I like it because it is on the darker side of pale ales.

This recipe is for a 5 gallon batch on my shoddy equipment. The mash is at 149ºF for 1 hour.

I would have liked more hops, to maybe try dry hopping as well, but this is the first year I found them and I could only harvest 2.6 oz (weight after drying). After trying a tea made with a few of the hops, I decided to treat them as dual purpose. This may have been a mistake but we will find out when the beer is ready!

The hops soak up a lot of liquid so the batch is smaller than usual. About 4.6 gal instead of 5 gal. Currently this batch is fermenting away nicely. End result should be about 7% ABV.

I made an Apple Crisp Ale last month and it turned out great. I got the idea from Brooklyn Brew Shop’s Apple Crisp Ale (I have their Beer Making Book), but I used some different ingredients. OK, really the only thing I did the same is the apple and cinnamon part. I used different malts, different hops, brown sugar for priming, and the last 2 apples that we picked in the fall.

Use normal directions for making a gallon of beer. Refer to the recipe linked above if this is your first time.

I made an ale with the same ingredients as Barking Squirrel Lager. It worked very well. Here’s the recipe for a 1 gallon batch.

You probably want to gently pour into a pint glass to serve to avoid any sediment that made it into the bottle. 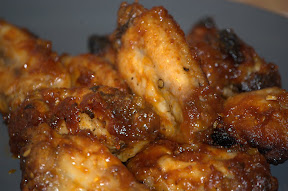 I got this recipe from Wings Across America by Armand C. Vanderstigchel.

“Eat these wings and ride off into the sunset.”

The title would more accurately be “Spicy Chipotle Sausage Fusilli in Vodka Cream Sauce.” But that’s too long. This recipe was adapted from a recipe for “Chicken Sausage Rigatoni in a Spicy Vodka Sauce.” It would probably go well with plain old chicken substituted in as well. Enjoy.

More pictures of the process in my Food September 2010 photo album.

Set a pot of water to boil for your pasta. In large saute pan, over medium heat, melt butter with oil. Add sausage and brown. Add onions, jalapeno and garlic and saute until softened. Add green pepper, paprika, spices, salt and pepper (except for fresh parsley, if you are using it; save it til the end). Cook a few more minutes.

Generously salt your pasta water and throw in the pasta. Cook until al dente (12 mins or so).

Meanwhile, add ‘matoes to the sauce and simmer for about 10 mins. Add vodka and cream and cook a few minutes more. Toss in cheese (and fresh parsley if you have it). Drain pasta and add to the sauce. Mix it up well and serve.

You’re going to need some nice fresh garlic bread and red wine. As you see in the picture we had a nice cheap Italian (Mezzomondo Negroamaro Salento).

Sauté peppers, onions and garlic in 1/4 c. butter until soft. (I don’t use that much butter!)
Remove from heat and add egg, cheese, crabmeat and breadcrumbs.
Melt the remaining 1/4 c. butter (you may need more depending on the size of the mushrooms)
Dip each cap into the melted butter and stuff with the crabmeat mixture.
Bake at 400 F until lightly browned on top.
Serve immediately.

Just like at Red Lobster. Serve with a nice warm buttery biscuit.

The recipe does not call for it, but we added some crab meat because it’s yummy. 1st thing to do for this recipe is to choose a white wine that you like to drink. Make sure to have some while preparing, since you’re opening it anyway. 😉

Read on for ingredients and preparation instructions.

END_OF_DOCUMENT_TOKEN_TO_BE_REPLACED

Pulled pork makes awesome sandwiches, especially when served with a barbecue sauce flavored with Jack Daniels whiskey and cola. Plan at least a day ahead to marinate pork loin. The barbecue sauce is made separately and can be used with any meat. (We have  used the same recipe on back ribs before and it is excellent.)

Read on for full ingredients and preparation instructions.

END_OF_DOCUMENT_TOKEN_TO_BE_REPLACED

1. Mix cream cheese with peppers and onions in a food processor.
2. Spread mixture over tortilla shell evenly. Sprinkle cheddar over top and roll up tightly.
3. Wrap rolls in plastic wrap and refrigerate for 1 hour before slicing into 1 inch pieces.
4. Bake at 350 for 10-15 minutes or until golden brown.

Erin says, “I minced the peppers and onions (since we don’t have a food processor) before mixing them into the cream cheese. Also, I waited until the antojitos came out of the oven to slice them – you get some oohy gooey cheesey goodness this way 😛 “

We made red and green ones with sundried tomato and spinach wraps for extra prettiness.

1. Place pineapple into a salad bowl.
2. Whisk together the lime juice, soya sauce, hot sauce and brown sugar.
3. Add to the pineapple, along with the cilantro and red onion and toss well.